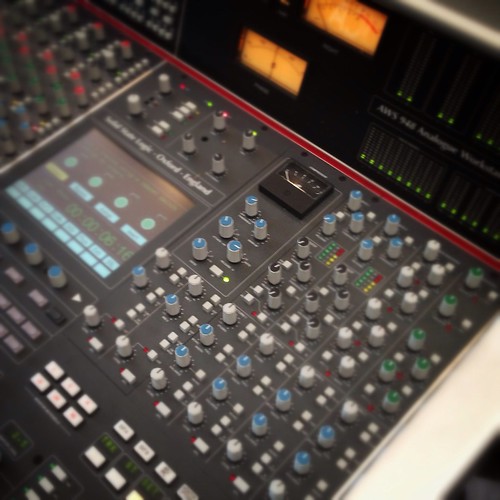 Dan and I schlepped down to scenic Fort Wayne, Indiana this past weekend to attend Sweetwater Gearfest.  It’s our third trip, and it’s always a good time.  Basically, mega-music-gear retailer Sweetwater (which, we discovered is now the 5th largest in the world) turns over their buildings and parking lots into massive gear tents and seminar halls for a weekend.  It’s an excuse for me and Dan to ogle and try out gear we’re unlikely to afford (or at least have the chance to play with), take a few esoteric seminars on mastering or mixing with a grammy winner, legendary engineer, DJ, manufacturer or two, buy some deeply-discounted stuff, and pick up a lot of free vendor swag.

In short, it’s a big festival for music engineering nerds.  Good fun for a dude like me.

Long-assed drive, though.  Dan and I switched off, as did our respective portable media devices.  Both of us were loaded with the latest and greatest indie music, and yet I faced ipod betrayal as it refused to play anything newer than 2005, with a particular emphasis on old Pet Shop Boys b-sides. Not that those are bad, mind you, but when you’re hoping to trade off some new music, a 7 minute track from 1985 ain’t gunna do the trick.  We unfortunately missed our window for any restaurants on the highway being open, so we were forced to survive off of gas-station snacks.  I wisely avoided the “Big Mama Pickled Sausage” and opted for a rest-stop salad. 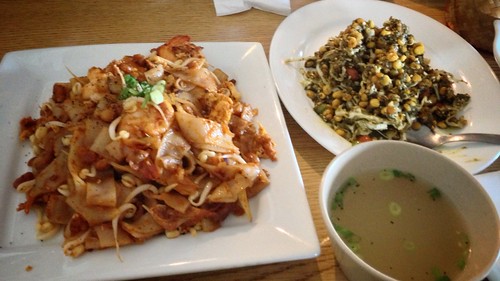 Despite the less-than-auspicious culinary start, Dan and I got to eat like kings over the course of the weekend.  Not only was food super-cheap, tasty, and abundant at our super-retro-60’s hotel, but I also managed to track down a hole-in-the-wall Burmese restaurant with good food and a mind-blowing fermented tea-leaf salad.  Sweetwater hired a few food trucks in addition to their cafeteria, so I got some tasty pork sandwiches as well.  I think they really hit their demographic on that one, because audio nerds and roasted meat seem to fit together pretty naturally.  And then we stopped at Smoque in Chicago on the drive back, where I accidentally ordered two pounds of smoked meat for carryout.

Also, our hotel had exactly two videogames in the lobby; an ancient Ms. Pacman and then a game called “Bags” which is, and I am not making this up, a professional-circuit beanbag-toss simulator.  It turns out I’m surprisingly good at it.

Vendors aplenty.  Many repeats from previous years, which is fine.  I felt bad for the guy from Bricasti, whose reverbs are brilliant but unless you can demo them, you wouldn’t be able to tell that they’re anything other than a featureless 2U rack box – and thanks to some of their gear getting stuck in customs, they just had a reverb head unit that nobody could listen to.  And Manley had all their mics and preamps demo-able, but distressingly close to the industrial fan needed to keep the tent from becoming a sauna in the 90-degree heat.

The new “electronic production tent” was a fun spot for me, obviously, since I could wander back and forth between the Ableton and Moog booths, noodle on a Sub Phatty for a bit, then play with a Push, then back to the Sub Phatty, etc.  And the rep from Pioneer was Lars from “MTV’s Real World London.”  Okay, I know he’s a real DJ dude now and everything in Berlin, but I watched a lot of cable TV in 1996, so the impression is made.  There was a Nord rep who gave a demo on syncing performance instruments to DJ gear, and he was fine and all but made the doofiest DJ faces I have ever seen.

Meeting a number of manufacturers and vendors face-to-face was cool.  Actually getting to talk to a Soundtoys rep about the 64-bit upgrade and the future of the rumored “Juice” plugin was reassuring.  I love their plugins, they’re extremely deep and sound extremely great, but they’ve been pretty slow to the party  for 64-bit compatibility and for certain bug fixes.  After a chat with the guy, it became pretty apparent why (the AAX conversion came at the same time, and they only have a handful of developers).  In the process I also got some tips on using a few of them, and scored a free tshirt.  I dig esoteric audio tshirts.

I bumped into Rob Papen at his booth during a slow period on Friday afternoon, and got a 1-on-1 demo of one of his products.  That was pretty sweet.   Also, apparently “Blue 2” is in the works.

I got my hands on a lot of gear I wouldn’t be able to try out otherwise, got a ludicrously good price on a set of field-repairable isolation headphones (cat-proof!) and a new Radial DI box.  Woooooord.

I lost Dan for a while in one of the guitar tents.  He went to fondle the ESPs and resurfaced a few hours later a changed man.

A few of the seminars were just amazing and outstanding.  Mike Wells’ mastering talk?  Revelatory.  Most of the mastering talks I’ve ever seen were of the “and then I just adjust this [super-high-end-compressor] a little here and listen, it sounds great!”  Wells took us through some more “difficult” tracks, that needed a lot more than what he called the “half db adjustment ”  It’s amazing to watch this guy work.  He got his talk Right – he didn’t swing his ego around, he didn’t condescend or overly dumb-it-down, but he also didn’t speak straight jargon either.  This is the second time I’ve attended one of his workshops, and he’s been great both times. 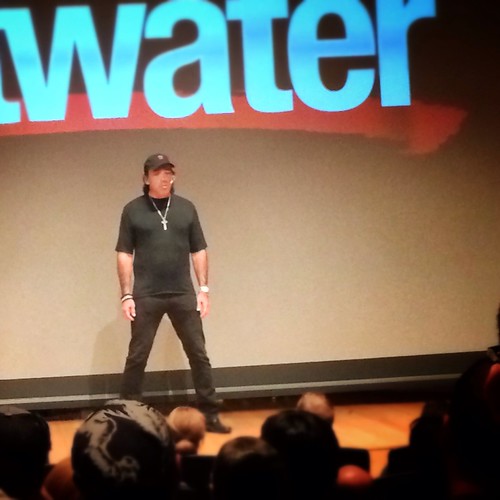 Before I get to what else was great, I need to address what wasn’t: Chris Lord Alge.   While I will never disparage his mixing skills – the guy IS a genius in the studio, and has the Grammies and the resume to prove it – as a speaker, he was basically terrible.  He’s standing in front of a room filled with people, many of whom flew in from across the country to be here, who are serious musicians, engineers, etc. – maybe not always pros, but enthusiastic enough that this is beyond “just a hobby.”  We had a limited amount of time to hear from one of the most legendary engineers in the world…and he spends 15 minutes of it lecturing us on why software piracy is bad, chiding us for not all having full shopping bags (uh dude we pick all that stuff up at the warehouse on the way out),  then another 15 of motivational speaking about how You Can Be Like CLA If You Just Believe and Work At It And Get Your Foot In The Door.  I can’t speak for everyone, but I would imagine that’s not why the auditorium was filled.  Maybe it was a canned speech that he gives elsewhere, but it seemed to be more than a bit patronizing to the audience.  He kept referring to how he “wins”, which gave me an uncomfortable Charlie Sheen juxtaposition.

(Aside: also, Sweetwater, can you prep all your speakers and let them know they don’t each have to individually give us the curmudgeonly “kids today don’t know good audio quality with their iphones and earbuds and loud music today” spiel?  We got it.  Last year George Massenburg gave us a full and disappointing 60 minutes on that, leading to Dan to develop the “Massenburg disappointment scale.”)

So after burning more than half his allotted time, CLA finally got into talking about engineering, giving a demo of his line of branded Waves Plugins.  Which was nice enough, I guess, but we never really did more than just scratch the surface.

A 1.3 on the Massenburg disappointment scale.  I was so hoping that CLA would at least show us how he worked, or even how he used or designed the plugins that bear his name.  Nope.  He barely even mentioned his non all-in-one plugs.  I didn’t expect a whole lot – given it was “sponsored by Waves” I fully expected it to be a protracted advertisement for the Waves CLA plugins, but I did hope for at least a little more substance than what we got – and I was thoroughly underwhelmed.

Okay.  that’s out of the way.  Now for some of the cool stuff.

Rob Papen did a very cool talk about his book “The Four Element Synth”, which is sort of a “this is how synthesizers work” overview.  Neat concept, and a pretty good demo of a lot of this stuff, even for an old synth-nerd like myself.  Some remedial info, sure, but it was very well-visualized, and he was able to quickly dial stuff in to give audible demos. 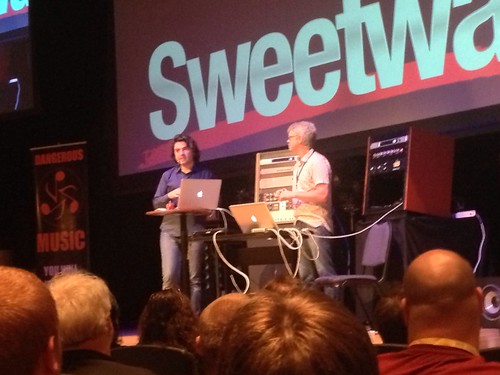 Possibly the most useful of the seminars was the “Mix off” between Fab Dupont and John Paterno.  Watching these two top-flight engineer dudes approach the same song in very different ways was fascinating in and of itself, but seeing how to approach certain common mix problems (even in a track as well-recorded as the one they were working with) helps illuminate some problems I have with my own approaches.  I think Fab’s mix may have a slight edge in the end, but I attribute that almost entirely  to the fact that Fab does this sort of live-presentation-mixing a lot AND was intimately familiar with the song.   Interestingly, Dan thought Paterno’s mix was better.  I also got to feel really smug every time one of them reached for a plugin that I not only own, but would use for the same thing.  Nice to know I’m not completely stabbing in the dark when I reach for an instance of Decapitator.  They were engaging speakers, DuPont is hilarious, and they both managed to get their point across succinctly.  They also managed to mix a complete and rather complex pop song in two hours, in ten minute increments.

DuPont is a proponent of analog summing, and Paterno isn’t.  DuPont mixes with 18db of headroom, Paterno mixes with faders up.  Hearing them take entirely different tacks, head-to-head, and both deliver great mixes kind of confirms what I’ve always thought about all the “magic bullet” mixing solutions. (there isn’t one)

We also scored like bandits on vendor swag. I have an impressive collection of lanyards and stickers.

We bugged out shortly after CLA’s talk, skipping the closing performance by Fountains Of Wayne.  The drive home was, Smoque aside, kind of a beast.  We hit a nasty thunderstorm just west of Fort Wayne, with near zero visibility from the rain and gosh-that-was-close lightning strikes.  It passed quickly, but given its proximity to the fest itself, I had some worry about the outdoor tents full of gear and power-cables during the evening takedown.

The pitch-black darkness, high winds, and rain of the second storm I ran into just east of Madison was even more of a skull-clutcher.

The cats were thrilled to have me home again.

A good weekend.  I intend to do it again.