Null Device makes electronic pop music…and then some.  Never ones to stand still, Null Device is constantly experimenting and evolving their sound. They’ve drawn on a wide variety of influences, passionately fusing everything from bhangra to post-punk to pop to ambient rock into their music.  Null Device is always pushing the borders of synthpop, but what is constant is their soaring, catchy melodies, lush vocals, and meticulously-crafted production.

Null Device wants you to expect the unexpected, but always know their sound.

A computer geek trained as a violinist, Eric has always been somewhat of a musical dilettante, to the point that ...
Read More 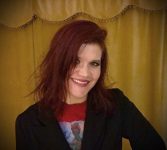 A longtime contributor to Null Device and related projects, Jill is a gifted singer with a fabulous wardrobe, a precocious ...
Read More

Eric is a biochemist with a poet’s soul, an artist’s eye, and an unerring ear for a hook. One might ...
Read More

Kendra has the least to do in the band since all she really knows how to do is play the ...
Read More

Null Device records at Submersible Studios in Madison. We’ve got some gear, too..

Klack – EBM and new beat, in collaboration with Caustic.

Every once in a while, Eric O. performs as a member of Matt Fanale’s electro-noise-punk project, Caustic.